Your Audience: Who Is Your Script FOR? 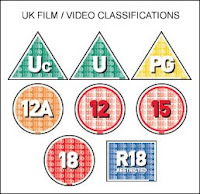 As screenwriters, how do we rate our scripts for sexual content, language, violence, gore?

Before I begin, it should be noted this is NOT a post about the potential rights/wrongs of censorship. Rather, this is a post about AUDIENCE - something often disregarded by scripts in the spec pile.

Knowing *where* your script *could* go in the schedule or what rating it would receive is highly desirable and is something a producer or agent may ask you. Why? Because without a sense of audience, scripts often lack a sense of identity.

Let's look at a fictional case study, based on many, many sci-fi scripts I have read:

Lead character is male and an adult or child (sometimes both).

Our protagonist must save his world/universe - literally or figuratively or both.

Lead character has a nemesis of some kind who will try and stop him from saving the world/universe - and has a vast, evil empire.

In comparison, our protagonist has just a bunch of rag-tag friends and not much equipment.

Sounds like it's in the DR WHO vein so far, right? And why not -- I get A LOT of scripts like it.

But wait, in the script there is also:

Some objectification of women, particularly alien women - though some men, too

Fight scenes with some graphic violence - particularly stabbing or impaling

Suddenly the goal posts have changed ENTIRELY -- and it's more in the TORCHWOOD vein.

These goal posts shifting mean the scheduling is completely different: Dr Who is a primetime family show, typically going out on a saturday night around 6-7pm. In comparison, Torchwood is more of a week-time show, post-watershed (9pm). If we were to buy either show on DVD then, Dr Who would typically be a PG, whereas Torchwood would be a 15.

I'm always surprised when writers tell me their script is prime time, when it clearly is a post-watershed show (and vice versa) or that it's a PG when it's an 18 - largely because it's SO EASY to find out what *type* of script your TV pilot or feature REALLY is.

How? By looking to what has already been created and those films/TV series your script is LIKE:

Swearing. I've written about swearing on this blog before and it's definitely one of the easiest markers for finding out *where* your script would settle audience-wise. Little kids (ie. under 10s)? No swearing please, end of - even "bloody" or "bitch" is questionable. PGs generally have no swearing, though sometimes surprise elements get through like ET's "PENIS BREATH!" (which my Dad always told me was "peanut breath", LOL). Post PG, the 12A certificate can get away with "fuck" as long as it's not a sexual reference and used for comedy effect; the most obvious that comes to mind is BRUCE ALMIGHTY's "Over to you... FUCKERS!" when Bruce has the meltdown on the boat. At 15, you can have quite a few fucks, motherfuckers, assholes, etc - in film; TV is a different ball game, where even the likes of SPOOKS only seem to have two or three "fucks" a season (ooo er). Note 15s in general DO NOT have the word "cunt" in, UNLESS it's in extreme circumstances, ie. a character is about to die and/or in a life-or-death situation. Casual use of the word "cunt" - ie. SEXY BEAST - is usually reserved for 18s.

Violence. Extreme violence and gore usually garner an 18 rating - but what is "extreme"? Well, look to what has gone before. Extended torture scenes in the likes of SAW are obvious, but I was surprised to find UNDERWORLD: RISE OF THE LYCANS was an 18, when the previous two films had been classified 15, for example. I can only conclude the reason for this was because at one point in the film, the escaping werewolves are IMPALED by huge spikes crashing in through the windows. When I went to a conference held by the BBFC years ago, they said impaling and stabbing are seen as *worse* than hails of bullets. What's more, audience tolerance is very much part of the agenda when it comes to violence: when ALIEN came out, it was an automatic 18, as was PREDATOR and ALIENS five or six years later. Jump forward to 2003 and ALIEN VERSUS PREDATOR is a 15, simply because the whole chestburst thing is something we're *used* to (quite a plausible argument for the impact of media images, in fact). Fantasy violence like supernatural powers (ie. telekinesis) apparently tends to depend on the context of how it is used. The first X MEN film apparently received a 15 rating simply because of Wolverine's claws and (accidental) stabbing of Rogue and the military men who stormed the school. After this, the precedence was set and Wolverine stabs a looooooooot of people!

Consequences of Violence. I was an A Level Film student when Tarantino was at his peak with the likes of RESERVOIR DOGS and to some degree, the likes of NATURAL BORN KILLERS and TRUE ROMANCE and screen violence was a real buzz word in the 1990s. We'd of course see extreme violence in the 80s thanks to Arnie and his mates, but people died so quickly it was hard to really take it seriously. Tim Roth's performance in Reservoir Dogs then shocked a lot of people, including me, because I for one had never truly thought about the real impact of a gunshot to the belly: I had until that point thought, "Bang, you're dead". So whether you like Tarantino or not, we now have *some* consequences to violence in films now - ie. victims writhing around, taking ages to die horribly etc - and that usually seems to garner an 18 rating.

Sex/Sexual Violence. It's kind of depressing that images of torture and violence are tolerated more over sex scenes, but there you go: if you have a LOT of sex scenes in a script - even between consenting adult characters - it's probably going to be an 18. Sexual violence is a different ball game altogether again and most of the time this is the right call I think, but even responsible films dealing with the real horrors of rape have been given an 18 rating like THE ACCUSED and given the fact the more recent THE GENERAL'S DAUGHTER got one too, it looks like this is not set to change.

Crime. Much of what we see on television and film in terms of crime is highly fictionalised, but occasionally you will see *true* crime in action, like how to break into a house with the use of a credit card. I don't recall which film first showed us this, but I remember there was a massive hoo-hah about it and it was demanded showing "real" crime techniques should be an automatic 18. Since producers are keen to get a 15 rating in order to tap the teen market better then, we rarely see such techniques in full anymore. The big exception of course is drug use: generally it's an automatic 15, especially for heroin or cocaine use, though some films like PULP FICTION get an 18 for close ups of syringes, etc (though that wasn't the only reason it got an 18 rating, of course!).

Danger/jeopardy. Another way of looking at what audience your script is for is looking at the TYPE of danger/jeopardy your characters are in. Even movies and TV shows aimed at children include threats of violence/death - but who it is FOR depends HOW it is handled. The child dying because the world is going to blow up? Probably a PG. A child dying in a terrible accident? Probably a 12A. A child being eaten/threatened by a monster? Probably a 15. A child being murdered by a paedophile? Probably an 18. It really is as simple as that.

Destination. Where do you plan on sending your script? If it's for television, you should know if your script is post-watershed or not and what qualifies it for after 9pm showing. Also, knowing which CHANNEL you would be targetting has a massive effect on audience: knowing the difference between BBC1, BBC2 and BBC3 is key. ITV has its own standards, as does Channel 4 and its selection of channels like E4. If your script is for film, knowing what *type* of film it is in terms of genre means knowing your audience - and having a fair idea of who would be making it: an indie prodco (how big/small)? A prodco with TV tie-ins like Film 4? A prodco that specialises in the American idea of "Movie of the Week"? Format plays a part too - would this script be live-action or animated? If animated - 2D or 3D? And so it goes on.

So in conclusion: know WHAT produced films/shows your script is LIKE - and know WHERE it is going... Then your script has an audience and an identity, one of the most overlooked things in the spec pile.
Posted by Lucy V at 1:18 AM

Thank you so much, wonderful information in here.

really good post lucy and i think i will make *all* my clients read it!

Thanks Jez, glad it was useful!

I actually heard that the word 'cunt' was acceptable in moderation in a 15, but 'fucking cunt' got you an automatic 18. I think I heard that on a Sopranos commentary...