F*ck Off, You C*nts: Swearing In Scripts 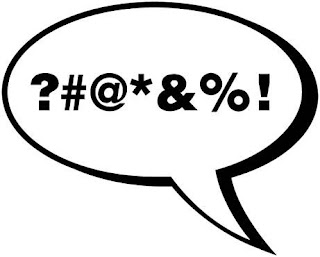 Neil has been very vocal over his position regarding Anne Widdecombe's assertions in the Daily Express about profanity. Since I'm never one to let a good ruck pass me by, I thought I'd wade in too:

Neil! What the f*ck are you doing reading The Daily Express, you t*sser??

Lol. Kidding, obv: love you really Neilster (though not about the DE, WTF?). But seriously, the whole swearing debate really does my nut. I can see both sides: if you've met me in real life, you'll know I have the mouth of sewer. I don't give a shit, they're *just words*. But am I so happy hearing my children swear with such abandon?? Nope, I think it sounds HORRIBLE when little kids swear.

Yes, you're right: I'm a hypocrite. But guess what?? We all are to some degree on this issue of *just words*: I don't believe there is a person alive who isn't. We ALL have issues *somewhere* with profanity and defamation, even blasphemy: we all have a line we believe shouldn't be crossed. We might say words are *just words* when WE say them, but then we hear *other people* in the street swearing and yelling, do you call them chavs/pikeys/street trash? You might not believe in a God, but if your three year old yells, "Jesus Christ!!", does it make you wince? What if one of your mates calls your girlfriend a "c*nt", even said in drunken jest, are you gonna take that lads? It doesn't niggle... Even a tiny bit?? (By the way, when I was a little girl, I thought the "C" word I heard grown ups allude to was "COPULATE"... True story. I think I was thirteen before I heard what it really was, a boy at school called Adam told me. Dirty lil' f*cker, lol.

Words have power. Writers surely have to realise that... Saying various words are *just words* makes no sense to me. What if I called a black person a "Nigger" or an Asian person a "Paki"? You'd say I was a racist BITCH and you'd be right (not that I would EVER do that I hasten to add). And while we're at it, let's have a look at the "bitch" part - say that to a hetero male, would you? Of course not. But women and gay men, hey - it's *just* a word (!). I'm not a PC-nut and believe absolutely in free speech, but words can be used to undermine others and I think the worst thing we can do is forget that.

But for now, let's examine swearing as a CREATIVE tool and the arguments using it FOR and AGAINST in our work:

FOR: People swear in real life. Sure they do. They also go to the loo, have colds, breathe, talk boring rhetoric, repeat themselves, say "um/ah" constantly, start stories that never go anywhere, go ON AND ON in blog posts on the internet about swearing... You see where I'm going with this? Writers "get" the fact scripts are not supposed to be real life, but a representation of real life in just about everything except the swearing issue these days it seems to me. Yes there's a case for using *anything* in a script, but DO YOU NEED TO SWEAR CONSTANTLY LIKE PEOPLE IN "REAL LIFE"? 9/10, I'd say no.

AGAINST: It deadens impact. People often swear in moments of high emotion and this can be a really useful tool in writing - but if your characters swear every five seconds, how are you going to signify that high emotion? You've just brought everything to the same emotional level and actually sabotaged your ability to do that.

FOR: Sexy Beast was a f*cking great screenplay. For the record, I love Sexy Beast . But Sexy Beast was only remarkable for its use of "c*nt" because a) no one had done it so frequently and unashamedly before and b) 'cos it was BEN KINGSLEY who was saying it: you can imagine audiences all the way round the English speaking world: "OMFG! GHANDI SAID THE "C" WORD!!!" So much of killer dialogue depends on actor delivery. Think too what it looks like on the page, especially if it's a spec.

AGAINST: Audience/Genre expectation. Whether you like it or not, swearing is one of script readers' signifiers of who your audience is and what genre your script falls in. Society might be more tolerant of swearing now - hence Bruce Almighty being a 12A here in the UK"Over, to you, FUCKERS!!" - but then comedy allows for a certain amount of swearing within context (Bruce has an "excuse": he's at the end of his tether); as does horror or thriller. Every now and again we might even see the "F" word just past 9pm on the BBC in stuff like in the last series of Spooks (Adam: "Don't be a fucking coward!") or Waking The Dead last week: "Boyd: "You fucking bitch!!!"). Yet I see swearing with abandon, constantly, in ALL kinds of scripts - even TV series writers assert would fit the bill on primetime family viewing. I'm. Not. Kidding. It doesn't work and immediately gets me asking: does the writer actually know who they are aiming for and what slot/genre they are going for? Not good, especially in a script report.

FOR: Words Are Arbitrary. Yes, we might all have to agree what words mean dependent on what language we speak and what era we live in, but as I said earlier in this post, words are not JUST WORDS - words are our tools. How we use them - including swearing - makes us the writers we are. I've actually heard writers AGONISE over whether their characters say stuff like "How're you?" OR "How's tricks?" (as this could be indicative of *what type of character* we're dealing with), yet give NO thought to stuff like profanity. Weird.

AGAINST: It's F*cking Boring!!! I once got a forty page script with seventy eight "c*nts" in. there's only one answer to that sort of profanity creatively I reckon and that's not, "What is society coming to??", but ZZZZZzzzzzzzzzzzzzzzzzzz.

So looking at the fors/againsts there... Well it's quite obvious I'm AGAINST swearing on a swearing-for-swearing's-sake level. Like any other word, recognise its power AND its usefulness and PLEASE FOR F*CK'S SAKE USE IT WISELY. Kthxbye. ; )
Posted by Lucy V at 10:12 AM

One thing I find quite irritating is swearing in scripts that is off-dialogue (in the direction, for example). I see it a lot in television scripts (such and such finds the biggest f**king spider you've every seen).

It just seems incredibly lazy - the writer can't find words to describe something so goes for shock, and hasn't the excuse of character or colloquialism to fall back on.

As I've gotten older, swearing in general seems lazier to me - despite pretty much growing up in an environment that used it as punctuation for most of my life.

Interesting post. I'm undecided on the whole swearing in scripts thing. When I wrote my first play and my class read it back to me, i realised that excessive swearing was not needed. I got my point across without it. Sometimes, however, swearing may be necessary for a particular character. Some may swear, some may not. Just like people in the real world! :)

Great post Lucy and worth saying. I agree with every line you said.

I'm put off more by swearing in scripts from new writers and find it lazy and frustrating because I want the range of emotions and expressions behind that swear word.

But as you put it, sometimes it's the only way due to the nature of the characters or a high emotional point for a character and is acceptable.

From an established and professional writer, for example Guy Richie, I have a different approach to it, as it becomes part of the realism and world of the characters, and like you said, in tone and delivery can become amusing.

Unless I literally had to put in a swear word, or it comes naturally to my characters, I have tended to unconsciously avoid it.

Maybe its the characters I'm writing but no swear words have ever make their way into the dialogue. The closest would be 'damn' and maybe a 'sh*t', the latter which probably got cut on the rewrite. :)

I don't really swear much in scripts as I think it's over-used in writing. I don't get offended by it but I when I hear excessive language I just tut in the same way as if something like voiceover was being overused etc.

I think my biggest revelation for swearing was when swearing myself. In a long meeting where louder, bluer folk than me basically used swear words as punctuation so no one batted an eye. In a brief moment of frustration I let slip with a muttered 'for fuck's sake' which subsequently silenced the room.

Oooh the power! Unless I think I can do that in the script (or real life) I don't bother. If you're gonna say it, say it like you mean it.

There are more fanciful words to use, than simple swear words that some might find offensive. The French Knights in Monty Python and the Holy Grail are one such example.

I would say use words that you believe you hear in real life, and would want your children to use while you're not around. It's worked for me so far, to a point :)