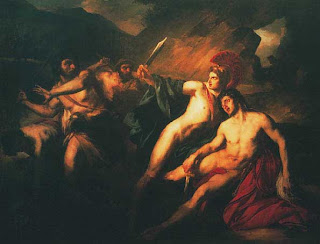 Scribes often write to me and ask, based on my script reading, how I can recognise a "good" script. The answer? I'm not sure you can put it into words. If you have a relationship that works, think of that moment you knew you were going to spend the rest of your life with that person. You just know, right? Cheesy, but true. Sure they annoy the crap out of you by leaving the seat up or using your razor on their legs, but ultimately This Is It. That's not to say it won't go to Hell at some point of course (hey, I'm the cheery type) but the intention is there: you're in it for the long haul and will take most (we don't want any martyrs here, thank you) of what life throws at the pair of you.

Scripts are the same then. I rarely read scripts that are perfect; very often I will find myself writing recommendations for development, even on the excellent ones. In fact, I can think of about two scripts in the last five years where I have had to report back to the writer and say: "I can't think of anything", they were that good. In short, the likelihood of your script coming back to you without even the most minor of quibbles is practically zero. There's also the point you can't change everything to suit everyone. You have to weigh up the POVs and remember what YOU wanted to achieve. I've received excellent pointers which I have ignored every bit as much as the self-centered rubbish some twisted readers spout due to their frustrations at not getting anywhere themselves. It happens, suck it up and move on.

Yet despite those excellent scripts not being *perfect*, they still stand out. Very often readers will talk about writers or scripts just being a "unique voice" or "talented", but that doesn't actually tell the rest of us mere mortals how to get a piece of that action. Similarly, writers are often told "story is king", but we all know that not ALL stories appeal to all of us - and that very often telling a story isn't an exact science and how one person tells one is different to another. On top of that, everyone has different strengths: some writers find dialogue easy - but we know good dialogue is not enough to carry a story; equally, good characters can sometimes take up too much story space; good structure is always a good start, but it's not a miracle cure. And who is good at all of these things, all of the time? No one, that's who. And on top of THAT, everyone knows there are no rules. Oh yeah: as William Goldman rightly said, no one knows what the hell they're doing either.

So how the hell can we improve, get better and get that all-important option or deal???

Well, for this 600th post, I thought I would really try and nail what *makes* a "good" story (and thus, *presumably*, a good script), based not only on my script reading, but my own specs - the ones people have responded well to AND the ones people have not. I've been chewing it over for the last couple of weeks, watching movies, reading through past reports and for me, it's come down to one thing:

When I read or write a script or watch a film, I want, no NEED the feeling the events which transpire happen as a kind of "chain reaction". I've written about that before with reference to structure, but in actual fact, this chain reaction actually "infects" everything to do with storytelling - theme, pace, character, plot, dialogue, the works. If you can present a story in such a way the reader and/or viewer is left with the feeling one thing HAS to happen because of another, you may well have cracked how to tell that story.

Of course, the Greeks were masters at this. Sophocles’ story of “Electra” is besieged with issues of morality; it would have been easy for the play to have become hypocritical in its approach. Indeed, Electra’s brother Orestes' slaying of both their mother Clymenestra and her lover Aegisthus in revenge for their murderous plot against their father is one of betrayal and double standards. Sophocles does not wash over this and make it a discrepancy; instead he embraces the concept and calls forth the consequences that will surely follow Orestes’ actions:

“This house of Atreus must, it seems, behold
Death upon death; those now, and those to come."
Aegisthus

Just as Orestes and Electra avenged their own father’s death and exacted a bloody fate on their mother and Aegisthus, the nature of consequence alluded to by Sophocles is that life is a chain reaction: Orestes and Electra are not Clymenestra’s only children and she and Aegisthus have offspring of their own. By the very virtue of Orestes’ murder and Electra‘s rage, another event has been set in motion: Aegisthus and Clymenestra’s children avenging their parents by killing Orestes, their murderer… And so it goes on, a family history bathed in blood and murder throughout the generations.

It's this feeling of "consequence" then which is often missing from specs: the reader is left feeling that *anything* could have happened in an event's place instead of what is on the page. You can tell a story any way you like, of course - but tie it together tight. Make the reader feel as if the character is driving the narrative, lighting the touchpaper so your chain reaction can go off. Make us feel your way is the only way your story can go.

Indeed, consequence am da thing. (There's a writing tool for that one too - in Jeff Kitchen's book - oooh, aren't I mean!)

As Aristotle said "If it ain't got consequence, it's just episodic and that's just rubbish." (More or less.)

Must say, you scrub up well, gal!

Excellent post. Makes me think of the paper game consequences. I wonder how that could be adapted for screenwriting? Hmm, I'll get back to you...

Adaddinsane - I think that was Sophocles, wasn't it?
; )