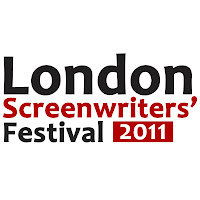 That's right, the London Screenwriters Festival 2011 website is LAUNCHED - go check it out now for a first look at people who will be there, including the mighty ASHLEY PHAROAH of Life on Mars, Ashes to Ashes and Wild At Heart! There's also a taster of some of the fab sessions that will also be running, including speed pitching, script clinics, designated networking sessions and more!

And there's plenty more where all that came from... watch this blog and Chris Jones', the website or Facebook or Twitter pages for more BIG announcements in the coming weeks. I can't tell you how excited I am, I loved the 2010 event, but feel sure this one will be EVEN BIGGER AND BETTER - and that's not hyperbole either. Industry People saw how well last year's event came together in such a short time, so are even MORE keen to get involved in this year's - delegates are in for a treat!!

And of course all Bang2writers are welcome to a nice big fat discount if you haven't bought your ticket yet - how does £30 off sound to you?? Just go to the big orange button on the right hand side of the LSF website that says BUY TICKETS and enter code BANG2WRITE.

And of course LSF would not be without its WRITING COMPETITIONS - a few of you have been asking about The Greenlight Award, which has been replaced this year. BIG ANNOUNCEMENT SOON!!! 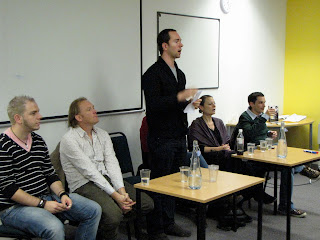 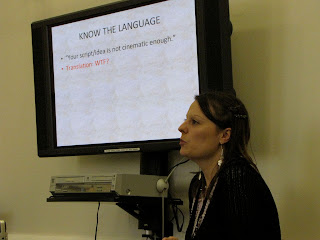 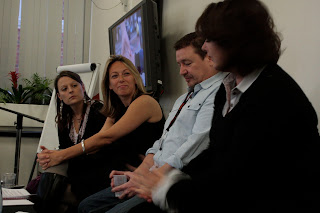 Posted by Lucy V at 3:53 AM No comments: Links to this post 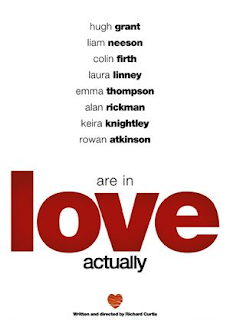 Love, Actually has got to be one of the nation's favourite guilty pleasures. The other week, over on the Bang2write Facebook page, I asked what you think of Richard Curtis's shameless Christmassy love fest and I got some interesting answers.

We had one or two people take away Brownie Points for its Christmas setting! Bah, humbug. Sure enough there is a jingle-jangle fairytail lightness to Love, Actually, and I imagine the film reel smells of fruitcake, but it's watchable any time of year. At least, any time of year you feel like an indulgence. I think we all put on a bit of weight when we watch Love, Actually.

But that's the perfect setting, because the film relies on indulgence and overcoming pessimism. If you can get through Love, Actually you've well and truly embraced the wonderful world of Rom Com indulgence.

Love, Actually may not be the best Rom Com out there – though Hugh “News of the World Nemesis” Grant does top a few, like About a Boy, which isn't really about romantic love; it's about a boy. And Love, Actually is about love, actually, and resolutely so, despite not being the best romcom out there. I mean, take this famous screenshot: 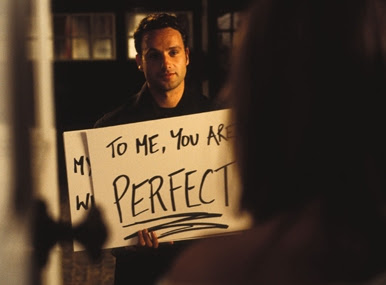 Why does Keira Knightley's character need to be told she's perfect, huh? Since when did she have self-esteem issues? They must have cut out a scene in which she sobs “ooh my husband doesn't think I'm perfect, what am I going to do?”

Anyway, although it doesn't reek of quality, Love, Actually certainly towers above the rest in terms of... quantity.

Back over on Bang2writers John made the very good point that Love, Actually has strength in its structure. It tells about a dozen stories of lurve; stories that, were each to be a feature film on its own, would be drawn out and dry. You know how we often praise films for showing bits of the story that “we don't normally see”? Love, Actually does the opposite; it shows only the biggest and best parts of the story.

Take Colin Firth's story. It comes in four parts. 1) Boy meets girl, 2) boy falls in love with girl, 3) boy and girl part ways and 4) boy and girl spend their suspiciously copious free time learning one another's languages and then meet up and suddenly get engaged in a crowd of randoms.

If that had been a feature length story, we would have learned more about those randoms, we would have explored Colin Firth's backstory as a writer, and we would have learned at least something about the female love interest, but really what we want to see is the first meeting, the falling in love, and the kiss. With Love, Actually we're allowed to skip the main course and go straight to dessert. That's why we put on weight when watching it.

Writing a guilty pleasure Rom Com must surely be just as guiltily pleasurable as watching it. You can shy away from logic and realism and instead paint beautiful pictures of what we want to see. Cosy bits, passionate bits, heartbreaking bits; and, let's face it, bits in which at least one character takes their top off.

I would've thought Rom Com would be a pleasure to write anyway, but we heard on Bang2writers that our own Lucy has read more than enough romcom scripts to know that there there is a lot of room in which to stumble disastrously off track. As Lucy says, there can be not enough Rom and not enough Com. Love, Actually is stuffed with both, and when we've not got Rowan Atkinson pulling faces, we've got Emma Thompson and a stepfather-stepson relationship playing guitar on our heartstrings. 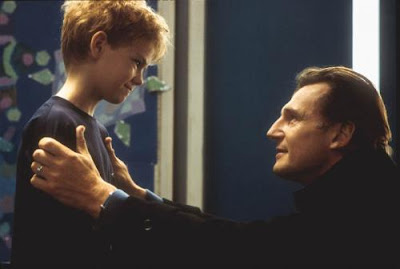 Even cynics can enjoy guilty pleasures like Love, Actually, but you have to push through a barrier of self-awareness first and shake off the cynicism, which is sometimes best done on your own, and in secret. And, as a tip: sometimes shame can be scrubbed off using sandpaper.
---------------
Eleanor is on the MA Scriptwriting degree at Goldsmith's, specialising in comedy drama. Join her on Facebook here and read her own blog, here.
Posted by Lucy V at 7:32 AM 2 comments: Links to this post

Fans of Fiction: cool or uncool? By Eleanor Ball 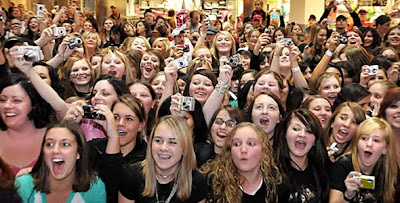 A lot of fan culture takes place online, and we've established now that the internet is cool. See, we're on it as we speak, and we're super-cool. The Social Network is one of the biggest films of the past decade; it seduced critics, hustled massive audiences, and rolled around in Oscars the way Colin Firth rolls around in melted chocolate (which he does, by the way, and often).

And in The Social Network the geeky jabbering and lines of code are perpetually melded with beer, parties, and Victoria's Secret models. These things are cool, and The Social Network was cool, alongside its subject matter Facebook, which is seen by some as being the core of the internet. The internet is cool.

But the natural home of the fan is not social networks but message boards. Facebook and Twitter are about quick short updates and the “like” button, but fans prefer to ramble and analyse. When I was 15 I joined a Green Wing fan forum in which the key subject was Stephen Mangan's chest hair. No joke.

Maybe an issue some people have with such fans is that they fixate on things they are unlikely to be a part of – someone they'll never meet, a series they'll never write, and so on. It's better, perhaps, to fixate on something that belongs to you. I had the pleasure of attending a screening of West is West at BAFTA earlier this year, and the producer, Leslee Udwin, spoke about the film beforehand. I don't think I've heard anyone speak so passionately about a film. She's a real West is West fangirl! Devoted to something she's actually a part of.

So perhaps the idea is that if you're devoted to something you're nowhere near a part of, then you're a bit of a loser. I've heard this opinion a thousand times, from friends and strangers alike. 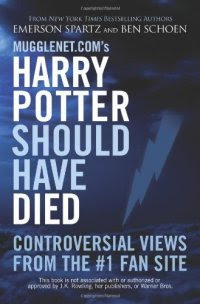 And they're WRONG! Because if you participate in fan culture online and immerse yourself in a story and maybe even contribute to it with fanfic (just look at all the Doctor Who writers who started off writing fan fiction), then you're an enormous part of it. Take Harry Potter. Very current topic of conversation given the release of the final movie (which I loved!).

JK Rowling admitted to consulting fan website The Harry Potter Lexicon while writing her books, and I recently returned to Mugglenet for the first time in 9 years to find it bursting with essays that would make English literature graduates gaze shamefully at their feet. Fans are now an enormous part of the Harry Potter world. Actually, they kind of ARE the Harry Potter world!

So these people are devoted to their fixation and they're actually part of it too; like the producer is a part of West is West; in a completely different capacity, but just as passionate.

Therefore, it's not really valid to think fans are uncool because they're wasting their time on something they're not a part of. They're a big part of it, so they're not wasting their time. And at least it's cooler than golf...
---------------
Eleanor is on the MA Scriptwriting degree at Goldsmith's, specialising in comedy drama. Join her on Facebook here and read her own blog, here.
Posted by Lucy V at 1:20 AM No comments: Links to this post

I read LOADS of scripts that try to use advanced storytelling techniques, such as time jumps, tandem narrative, flashback and non-linearity. And guess what: 99% of them do not use these techniques well. This is why these techniques end up with a bad name in the spec pile, which of course is such a shame and threatens creativity as readers on work experience end up believing McKee-style assertions about supposed "lazy writing" instead.

If only there was someone who ran classes on HOW to use these devices WELL...

... Oh wait THERE IS! None other than Linda Aronson. Now I met Linda at London Screenwriters Festival last year and can not only report she's a LOVELY PERSON, she's great at what she does as well - which is explaining how narrative works and how we can break it down and represent it.

Linda is running one such class this November (12th/13th), brought to you by Team LSF. A 2 Day Class, this would normally be £119.00 - but to Bang2writers, you need only pay £65!!! That's right. Just SIXTY FIVE POUNDS - that's £32.50 per day for fab insights that could very well change your scriptwriting for the better FOREVER.

Just enter code BANG2WRITE at the site to get your discount. And tell all your writing friends!
Posted by Lucy V at 5:40 AM No comments: Links to this post