Q: How Best To Introduce A Character? 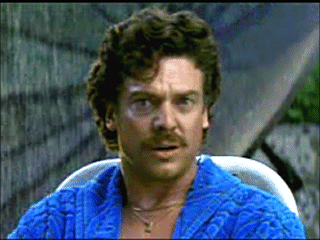 Thanks to my old mucker David Bishop, who asks:

"How best to introduce characters - list 3 attributes, a single sentence, or let their actions [and words] speak for themselves?"

First up, I'm going to be really annoying and saying there's no "best" way, just people's opinions. I could say any one way of the three David's listed is "brilliant" or "terrible"... and then you'll find *that* way condemned/praised when you submit your script somewhere. It's just a fact of (screenwriting) life.

HOWEVER there are obvious traps screenwriters fall into when introducing and maintaining characters throughout their narratives and these are the ones I see most often in spec scripts:

- Relying on what characters are wearing to say something about them (ie. Scantily clad woman? Loose morals! Goth? Must be miserable and depressed! Sigh)

- Relying on gender (Woman? Is a drudge everyone puts upon... or is a selfish vain cow who needs to know *what's important*! Man? Is a loser who doesn't realise *what's important* in his life... Marriage... Family... the works! Child? Girl children are sweet and serene and rarely cause trouble... Boy children climb trees and run away more frequently!)

- Relying on physical attributes (woman? TELL US ABOUT HER BREASTS. Man? Tell us about his SMILE and/or EYES).

And perhaps most alarming of all (though only because I see it challenged the least, the above makes grim reading too):

- Relying on disability/deformity (Character in a wheelchair? Then they are a VICTIM or have an ATTITUDE PROBLEM. Character with a facial disfigurement? Then they are ACTUALLY EVIL - OMFG!!).

I wish I was exaggerating about the above list. I AM NOT.

But let's assume you would NEVER write anything as crass, offensive or 2D as in my list. So what are my tips for introducing characters? In no particular order, here you go:

The Lawrence Kasdan School of Thought. Everyone knows- or should know - how he describes Teddy in BODY HEAT: "Rock n' Roll arsonist." Four words or pure genius. WTF is a Rock n' Roll Arsonist??? Who knows, who cares - YET WE STILL KNOW WHAT KASDAN IS TALKING ABOUT. This character is someone who is hip, cool, who has a dangerous edge. In my mind's eye I see a grungy 80s rocker type with long hair, tattoos and earrings and GODDAMN IS HE SEXY, yet somehow I know I should back off because he's going to cause me nothing but heartache. And whilst my own personal vision is not translated like this *exactly* in the film, this still sums up the character perfectly. If you can "sum up" characters like this, then GO FOR IT, I hardly ever see it and I always wonder why. I try and do it myself, with various modicums of success. I recall I wrote a script yeeeeeeears ago when I described a mere secondary character as a "Suburban Popeye". The script was never made (largely because it was otherwise pants) but you know what? Just about EVERY SINGLE BIT OF FEEDBACK I received had noticed and praised that character description! So I think it works.

The Callie Khouri School of Thought. One of my favourite lines of scene description in one of my fave movies THELMA AND LOUISE describes Thelma's husband, Daryl: "Polyester was made for this man." Daryl is a MILLSTONE around Thelma's neck; he's literally sucking the life from her. He's the type who wants his dinner on the table by a certain time, the type who doesn't give a toss about Thelma's own satisfaction - in sex, in life, in ANYTHING. Thelma is not his wife so much as his glorified serving wench. And what would a man like this wear? Polyester. Of course. Something mundane, cheap, doesn't-give-a-shit. Assigning *something physical* - a fabric, a car, a piece of jewellery, ANYTHING - that gives us a *clue* about that character's personality and motivations, ie:

MARC: so full of self righteousness, he's got a hair shirt on under his office clothes.

KATY: self esteem so bad, she covers her pretty face with far too much make-up.

SALLY: so disconnected and oblivious she's constantly on Facebook.

The Usual School of Thought. It's true that most spec scripts DON'T subscribe to Lawrence Kasdan or Callie Khouri's ways of introducing characters. Instead, they will make a brief intro to the character, followed by letting their actions and words speak for themselves. And do note: THERE'S NOTHING WRONG WITH THIS. However, to avoid being dull with your character intros in this manner, I would recommend thinking about the following:

- WHERE do we meet them? You wouldn't believe how many characters I'm introduced to in bed (oooooh matron!). Whilst obviously this *can* work, we all need to sleep, wake up, get up, etc; even insomniacs usually go to bed for a bit! So what does introducing a character getting ready for the day actually achieve? 9/10 not much. I see a similar amount of characters at work and this is a big improvement, especially if said character has a particular skill of some kind (especially one that will come in useful later in the story) or an attribute (that again, will later come into play!).

- WHAT are they DOING? So many writers introduce characters doing dull things like walking, getting ready, waiting for buses or sitting in classrooms doodling. Let us KNOW what this character is LIKE via their ACTIONS. The more outlandish the better sometimes... Don't have someone just RUNNING, have them do a huge assault course to test their resolve, like Clarice Starling in SILENCE OF THE LAMBS which shows us her inner strength.

- WHY are we WATCHING?? Making us WONDER what will HAPPEN NEXT is key to introducing new characters. Remember I just said introducing a character walking is dull... But actually, it doesn't HAVE to be. Consider two famous characters introduced walking:

Tony in SATURDAY NIGHT FEVER. He's strutting his stuff down the street, in his gladrags. He's hip and cool and... CARRYING A PAINT CAN?? Intriguing... What's that for, etc? This leads us into the next scene in the paint shop, giving us insight into Tony's life and his job, hopes and ambitions.

Ace in ACE VENTURA: PET DETECTIVE. He too is strutting his stuff down the street, carrying some sort of package, dressed as a delivery man which is patently some kind of weird disguise because he's ALSO got *something* stuffed down his shirt... and he's being decidedly weird on the way, "dropping" the package, kicking it, etc... Why???

Introduce characters any way it works, which I'd wager are: 1) non-stereotypical 2) Not outlandish for the sake of it and 3) NOT DULL!

"- WHAT are they DOING? So many writers introduce characters doing dull things like walking, getting ready, waiting for buses or sitting in classrooms doodling. Let us KNOW what this character is LIKE via their ACTIONS. The more outlandish the better sometimes... Don't have someone just RUNNING, have them do a huge assault course to test their resolve, like Clarice Starling in SILENCE OF THE LAMBS which shows us her inner strength."

-- is the most under utilized method and by far the MOST effective.

I don't remember what characters are wearing, the expression on their face, the color of their hair, hell, half the time their ethnicity when I'm reading a script (and honestly, those are all things that are completely subject to change based on casting).

What I do remember is what they are doing if it is at all even remotely interesting.

Giving them specific unique actions is one of the BEST methods to create memorable characters. If you have a script with a ton of characters this also helps greatly to distinguish between different characters. Jake was the guy slapping a puppy. Jill was giving a handy to Ryan under the table in Chemistry. Talk about Chemistry. Steve was correcting the teacher's long-hand calculus.

I think there is a big misconception that the character intro is supposed to describe (in the prose) what type of person would do these sort of actions -- when instead the simple act of showing a "generic" person doing these actions actually ILLUSTRATES what kind of character they are.

Think about how we meet OBI WAN KENOBI -- guy in a shroud in the desert, saving Luke from sand people. Or HAN SOLO -- in a seedy bar, blasting Greedo to bits.

P.S. Another method of introducing a character that works fairly well is having other character talk about a character.

I rarely see this in amateur spec screenplays. But it works very well. It sets up an expectation. Then you can have fun by either reversing the expectation or coming over the top (the earlier descriptions that seemed over the top, were actually pale in comparison to the real thing).

Damn, I have a character in a wheelchair with a facial disfigurement!