12 Character Journeys We Can Learn From (No Real Spoilers) 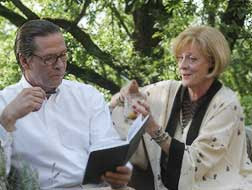 My House in Umbria, 2003. I picked this film up for £2.99 in a sale; it stars Maggie Smith who is always excellent and from the title and box I figured it would be a nice, feel-good film for a Sunday afternoon. It is in fact, a journey of raw emotion: in the aftermath of a terrorist attack, a woman opens her Italian home to several survivors who have nowhere to go, including an orphaned child. When the uncle of that child arrives to collect her, the owner of the house finds herself pulled in several directions - not only towards the child, but the difficult, tortured uncle who's trying to do the right thing but also towards her own, painful past. Brilliantly written, wonderfully acted, this drama shows us the minutaie of daily life is often more powerful than the explosive Hollywood blockbuster.

When Was The Last Time You Saw Your Father?, 2006. I saw this on a free showing when the lovely Martin managed to get us tickets; I probably wouldn't have bothered otherwise, since it had Colin Firth in it. I had to eat my words though, since he was really good. Firth stars as the author and poet Blake Morrison: it's an adaptation of his own autobiography where he unravels the difficult relationship he has with his own father. It's an uncompromisingly honest, sometimes unflattering piece; I wonder what Morrison's family might have had to say about the book and movie. But good drama can be uncomfortable and Morrison shows his own mistakes and regrets with good grace.

The Brave One, 2007. Just because you're writing a genre film - especially one as tired as revenge - does not mean you need skimp on character. The Brave One shows us that it's possible to empathise with a character who does shocking things; we understand Erica's actions without condoning them. What's more, it has one of the best twists at the end I've seen in decades - simply because I never saw it coming, despite being the worst twist-spoiler to watch films with as the Hubster often laments (I predicted the "twist" on Sixth Sense immediately after the prologue, comes with being a script reader). 'Nuff respect to The Brave One: read my review here.

Once Were Warriors, 1994. I watched this on video when I was still at sixth form; I had do an essay about a non-hollywood film and an older friend of mine gave me this from her own stash. Until that point I hadn't even been aware New Zealand had its own film industry, so I figured this would be some dire diatribe about how unfair life is. Instead, I was blown away. The story of a family blown apart by domestic and sexual abuse, what really makes this film is the powerhouse performance by Rena Owen as Beth. The mother in the family, she discovers one of her children dead - and if you've ever had the misfortune of hearing a mother's hysterical wail for a lost child, then you know just how realistic her screams of total loss and grief are. Brings tears to your eyes and a lump to your throat.

Harsh Times, 2005. I've written before on this blog just how great the structure of this movie is, but I haven't mentioned how fabulous the character of Jim is, played by Christian Bale. Best known for Batman and other bad guy parts like in Shaft and American Psycho, this is Bale's best work as an antagonist in my eyes, no question. A brilliantly written part, Jim is his own worst enemy, driving all the action in Harsh Times, leaving the otherwise passive protagonist with one single, devastating choice at the end of the movie.

You Can Count On Me, 2000. This movie is a really traditional "fish out of water" concept - two siblings are reunited when a single mother's brother suddenly reappears after years away in Alaska - yet it works, probably because of its simplicity. What really marks this film out I thought was the child's developing relationship with his "instant" uncle; the dialogue between them was particularly realistic.

Notes On A Scandal, 2006. A masterly adaptation, with an excellent cast. I don't normally like Judy Dench much as I feel she is largely the same in everything - yet she was a perfect choice for the dastardly Barbara Covett. What is particularly interesting here is that Barbara is completely unsympathetic as our protagonist, yet we find ourselves completely captivated by her. Read my case study on the book versus the film here. 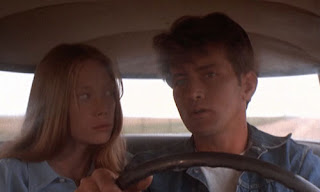 Badlands, 1973. This is a real favourite of mine. I first watched it when I was fourteen: it was accidental; I couldn't sleep and it was on BBC2 really late. I got into massive trouble for waking up one of my younger siblings when all the gunshots went off in the field bit. Like Bonnie and Clyde, the two main characters have a real chemistry and even though the Martin Sheen character is a total psycho and they're horrible murderers, we can still see *how* this all happened, even if we don't condone it. Oliver Stone's Natural Born Killers seemed a pale comparison when I got hold of a (then-banned) copy at school, from my video "pusher" Weird John (that was his real name, honest).

Bonnie And Clyde 1967. Like most people of my generation, movie-making starts approximately in the late seventies around "Jaws" time as far as I'm concerned... NOT because I don't like movies before this time, but because when I was a kid and had plenty of spare time, there was not thge access to movies on video bar the big blockbusters and of course classics like Alfred Hitchcock: if it didn't get on to TV then at a time I was watching, I didn't get to watch it. My father always raved about this film though, so I went looking for it online a couple of years' back and found a copy on eBay. What I love about this film is the chemistry between Bonnie and Clyde - they seem completely devoted to each other and even though it's a biopic and we know *how* it will end, it still comes as a surpise *when* it does. 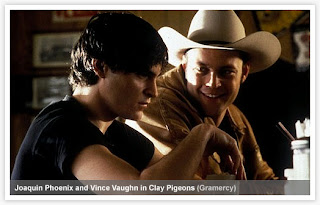 Clay Pigeons, 1998. Vince Vaughn is best known for his Frat pack movies and generally playing a nice guy who gets out of control or taken for a ride in some way, so it's a real departure to see him playing a full-on serial killer - and a cowboy at that. Joachim Phoenix too puts in a brilliant performance as the protagonist of the piece, Clay, who must prove he has nothing to do with the murders in their small backwater town - but again, the writing has provided them with gifts of parts.

The Ice Storm, 1997. Like Once Were Warriors, there are some powerhouse performances here as the writing explores death and betrayal; the families are knit together not only by their infidelity and secrets - and again, Sigourney Weaver brings to life a damaged, bitter female character that is both complex, yet easy to comprehend.

I'll throw in "Dancer, Texas Pop. 81", written and directed by Tim McCanlies. The guy is now a headwriter on Smallville, "Dancer" was a small gem back in 1998.

"Story of four high school kids in Texas upon their graduation, deciding whether to stick with an old promise: to leave town after graduating" is the premise. It's as if McCanlies predicted the emotional part of "American Pie" and the likes, writing a very down-to-earth, very accurate portrait of growing up and weighing dreams against responsibilities.

What does it teach us in terms of writing? That once again one of the most important things to do is to GIVE YOUR CHARACTERS SOMETHING THEY WANT. I read so many screenplays with protagonists who're just floating through life, no goals, no desires, no needs. They are, and I want to quote Firefly, "objects in space" - randomly bumping into other objects. But without needs we don't know why we should spend time with these characters.

I don't know it JJ - but I will certainly watch it now on your recommendation!